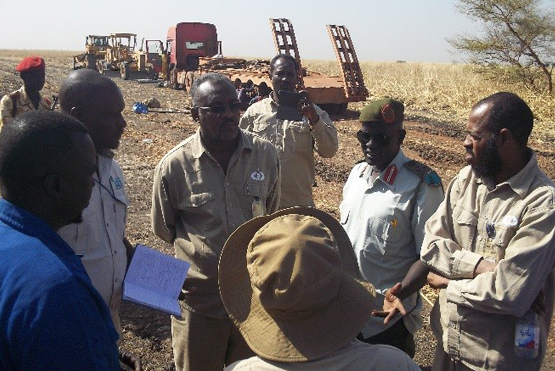 The Laying of a Legacy

The quest for an explosive-free South Sudan does not come without its difficulties. Despite the challenges, TDI continue to clear areas of land littered with landmines and unexploded ordnance for the future safety of those who live in danger of these items.

In response to a mine strike that occurred in Pariang, South Sudan, one of the TDI Teams found themselves in the spotlight when they were requested to clear this area in the midst of construction of an oil field. The mine strike caused damage to equipment during construction works, which consequently halted the progress of this oil operation.

Until TDI reached the region to assess the unforeseen hazards, movement was restricted and daily activities were brought to a standstill. Community confidence was lost. Fisheries, small-scale agriculture and the surrounding pastures were all at risk of the underlying explosive hazards. The communities waited with anticipation for the area to be cleared so that they could return to their day-to-day routines.

The TDI team conducted an intense assessment of the area using all available assets and methodologies at their disposal. After initially verifying an area 500m either side of the mine strike, they widened their search to ensure that no other unforeseen explosives were present. While this verification was taking place, employees of the construction company used alternative routes to travel at the trepidation of TDI staff.

The underlying oil pipes initially posed a problem with the detection equipment; however, the clearance activities were successfully completed. Whilst the clearance efforts were taking place, Mine Risk Education (MRE) sessions were held with residents, farm workers and prisoners from Kombo prison. Those that attended the sessions were grateful for the information and promised to pass it onto their relatives.

Once clearance activities had finished, construction continued and the movement of people and animals resumed. Heavy machinery were redeployed and calm was brought back to the people of Pariang. Nomads looking after their cattle also returned to their areas.

The residents of Pariang expressed their appreciation to TDI staff for the clearance conducted. With the MRE received, they are better equipped to recognise unexploded ordnance in the future.