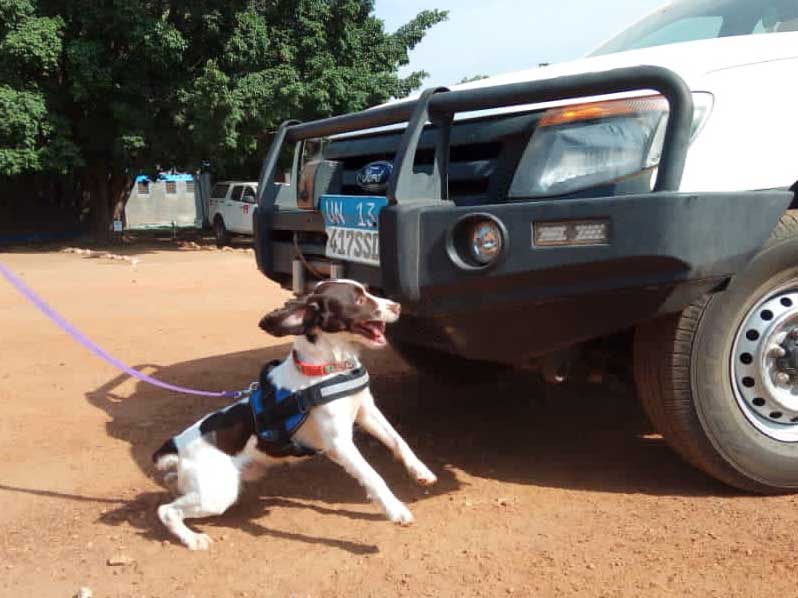 Rehoming our Dogs after Retirement

At TDI, all of our staff are important to us, including our dogs! Following successful careers, many of our dogs are eventually retired and need to be rehomed. After dedicating most of their lives to the mine action industry, Charlie and Korado were two of TDI’s dogs that retired in early 2020. In contrast to their working lives in South Sudan, they were adopted by two families elsewhere in Africa where they could enjoy their retirement to the fullest.

Charlie
Charlie, a sprightly Springer Spaniel met his future owner, Malcolm, whilst they were both working for TDI in South Sudan. Based in the same camp, Malcolm, one of TDI’s Administration and Finance Managers, spent time with the TDI dogs every evening, getting to know each of them individually. He asked the TDI Explosive Detection Dog (EDD) handlers question after question in order to understand each dog better. It did not take long before he considered adopting one of the dogs when they were retired.

A few months went by when Malcolm heard that two of the EDDs would be rehomed; Charlie and Korado. Louise, a colleague of Malcolm’s and a TDI EDD handler, would bring Charlie to visit him every Sunday at his tent; perhaps an unobtrusive way to help convince Malcolm to offer a home to Charlie. He explored the possibility of adoption further but did not make a decision straight away. Two days before Charlie and Korado were due to fly to Nairobi to the TDI homing agent, Malcolm decided to adopt him. Charlie finally had a forever home waiting for him in Zimbabwe!

Korado
Malcolm’s decision to rehome Charlie prompted his colleague Stanley, the TDI Fleet Administrator, to adopt Korado, a German shepherd. Stanley was so excited to bring Korado home to Zimbabwe. This excitement was also felt within his family, especially his son, who loved the idea of finally having a “police dog” of his own.

Being the feisty dog that he is, Korado chewed two travel crates, his water bowl and his leash, delaying two flights to Zimbabwe. His new family was so excited to meet him and it would seem that Korado shared in this excitement! With two new crates in tow, Korado and Charlie resumed their journey to Zimbabwe.

Then and Now
Charlie and Korado eventually arrived safely in Harare, and onwards to their last stop in Bulawayo. Since their arrival, they have settled well into their new families, getting to know their future companions. They both love the attention that they receive and are adjusting to their life of retirement after many years of service in the field. They each have large gardens to run around and play, and Charlie seems to have taken advantage of his new swimming pool too.

Two of the TDI dogs who were born in the United Kingdom have settled well into their forever homes in Africa!