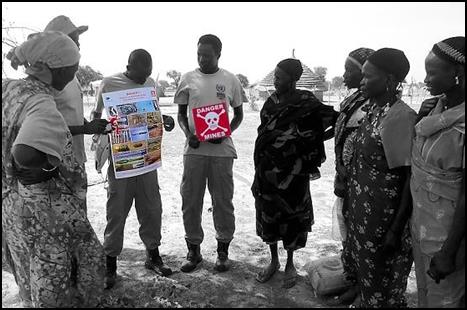 In December 2015, a curious, uninformed, 13 year old boy brought a hand grenade close to the TDI compound in Abyei, Sudan.  He had kept it for three weeks in a friend’s home unaware of the inherent danger of handling this extremely dangerous item. Thankfully, the team were able to persuade the boy to hand it over to them for disposal; however this incident emphasizes the ongoing need for Mine Risk Education to local populations in these areas.

Within the Abyei context, the major threat is unexploded and abandoned explosive ordnance which are dangerous remnants left after decades of armed conflict. High-Risk groups can be categorized as children, people who are involved in field activities, fishermen, wood and grass cutters, cattle herders and people walking long distances. These risk takers can be classified as unaware, uninformed and misinformed groups.

Due to limited job opportunities, and for economic reasons, these groups are often forced to work in hazardous areas as people rely heavily on the land to produce food and generate an income; despite the dangers, many choose to work in the fields.

An additional and leading risk factor is also reckless behaviour. Children, especially boys, who are generally permitted more roaming freedom than girls in these areas, tend to be curious about explosive remnants of war as these dangerous items can be found in various colours, sizes, shapes and materials which are very attractive.

TDI’s MRE program delivers key messages through their activities to these At-Risk groups. For younger people (aged between ten and fifteen) they are informed of the differences between landmines and ERW, how to avoid risk areas and actions to be considered if forced to enter one, common ‘risky behaviours’ and how they can overcome these problems. They are also given information on the challenges that children will face following the loss of their limb/s and shown how easy it is to lose their life by showing them case studies from recent incidents in the Abyei area. They are all encouraged to report to their parents or guardians about any suspected items found, and not move or touch them.

Generally children have limited experience and are inquisitive about visually appealing items. They want to learn through discovery and they do so often through practical experiments.  In Abyei, many of the rural children have limited exposure to formal education and are unused to formal learning environments.  However it is reported that they tend to absorb information quickly despite some short attention spans.

Soon after MRE was conducted in Abyei town area in late December 2015, a member of the community called one of the TDI team members and informed him about the presence of suspected ERW in Doungap area.  A TDI team visited the location and confirmed the threat as UXO.  It was a warhead of a PG7 Heat Rocket which was fired but did not detonate, making it incredibly unsafe to move. The team demarcated the location with official warning signs and informed the local community about the threat through a community liaison approach until it could be safely removed.

TDI’s integrated clearance teams are currently conducting various Mine Action activities of which MRE plays a large part in addition to clearance of these hazards. One of the major expected accomplishments is a safer and more secure environment that facilitates safe voluntary returns, peaceful migration and enables the delivery of humanitarian aid, clearing the way to a less dangerous and more liveable place for inhabitants and returnees.