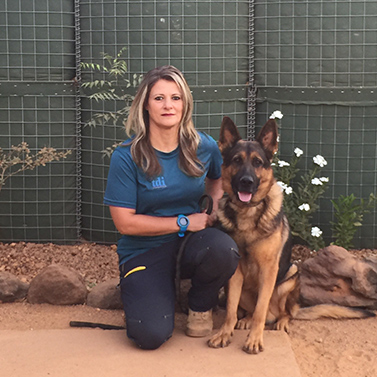 Meet Marina, one of TDI’s Kennel Master and Dog Trainers in Mali. A mother and a grandmother, dog handler, dog trainer, close protection officer, CCTV operator and representing South Africa in Judo in her teens, Marina is a strong-willed and talented lady. Her career working with dogs spans almost thirty years. After searching for more challenging roles to develop her career further, she decided to take up the opportunity with TDI, joining the company in early 2020.

Working with the South African Police

Marina joined the South African Police Dog School in 1991 as a handler and trainer. Initially, Marina worked in the breeding section of the school where she trained the puppies in obedience and attack protocols, narcotics and crime scene investigation to prepare them for patrols or other courses that they were selected for later in life.

Marina eventually expanded her horizons within the school and went on to train the dogs that needed to be on standby in case of an injury or if accreditation could not take place.

After more than ten years with the dog school and attaining Senior Police Officer status, she became an Inspector in the South African Police, initially investigating general cases. She joined the Serious and Violent Crimes Unit, investigating dangerous crimes including robberies and murders. Marina was then selected to investigate crimes against women and children; a part of her career that she found particularly challenging.

In 2010, Marina left the South African Police to pursue new ventures further afield. She took up an opportunity to initially work as a dog handler in Afghanistan and then progressed to a dog trainer whilst she was based there. She worked in Afghanistan for over three years when her dog began to develop arthritis. This limited his ability to perform his duties. Marina decided to adopt him so she resigned and brought him back to South Africa with her.

After working in South Africa, Afghanistan and recently Iraq, Marina decided to look for opportunities that would challenge her even further. To enhance her skillset, she completed her Dog Trainer’s Course at the Hill Country Dog Centre in Texas in 2019. When a position with TDI in Mali became available, Marina jumped at the opportunity.  Although restrictions were put in place due to the coronavirus pandemic not long after she joined TDI, Marina, along with her colleagues, continue to complete UNMAS tasks despite the limited movement of personnel.  She has settled well into her role and is a valuable member of the TDI team, ensuring that the TDI dogs and their handlers keep fit and active as they adjust to this ‘new normal.’