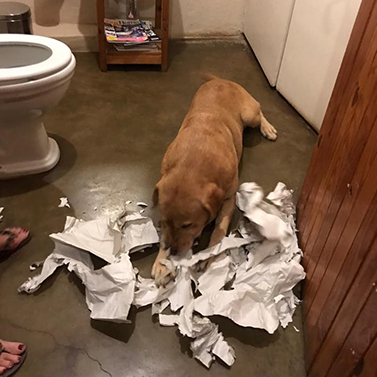 Life after Retirement for Tom

When TDI’s detection dogs stop working after years of service in the field, it is our aim to find the most suitable retirement homes for them to live out the rest of their days happily and peacefully, with families that will provide them with the best care and love.

Meet Tom, a yellow Labrador who originally worked for TDI in Mali and retired with his new family in Zimbabwe in 2018.  Tom struggled to adapt to the loud environment in which he was based in Mali so was retired as a working dog.  Hugh and his family had wanted a Labrador and when he heard that Tom was looking for a home, he knew he could give Tom the best life of retirement.  He soon began the process of bringing Tom to Zimbabwe.

Jessica, TDI’s Operations Support Manager helped with the logistics of flying Tom from Mali to his new home in Zimbabwe.  When Tom arrived in Harare and met his new family, he was very relaxed – he had found his perfect forever home!  Shortly after his arrival, he searched the whole of Hugh’s house and garden as if he was in the field but soon realised he was not here to work but to enjoy his retirement, which he does to the fullest.

Like other working dogs, Tom was accustomed to spending time within his kennel.  In comparison to his small enclosure in Mali, he now had a large farm garden and swimming pool to play in, so took some time to adjust to this new found space.  Hugh soon made Tom a makeshift pallet dog box since he still preferred to curl up and sleep in a small space.  According to Hugh, Tom is “happy as Larry” with his new homemade box and sleeps in it every night, next to his new found companion.

Tom has always been an active dog who enjoys exercise.  He goes for a walk twice a day, is always up for a game of fetch and being a true Labrador, loves spending time in the swimming pool!  Tom loves the other animals he lives with including dogs, cats, horses and cows to name a few.

After two years with his new family, he has settled in well and loves the slow-paced life of retirement!