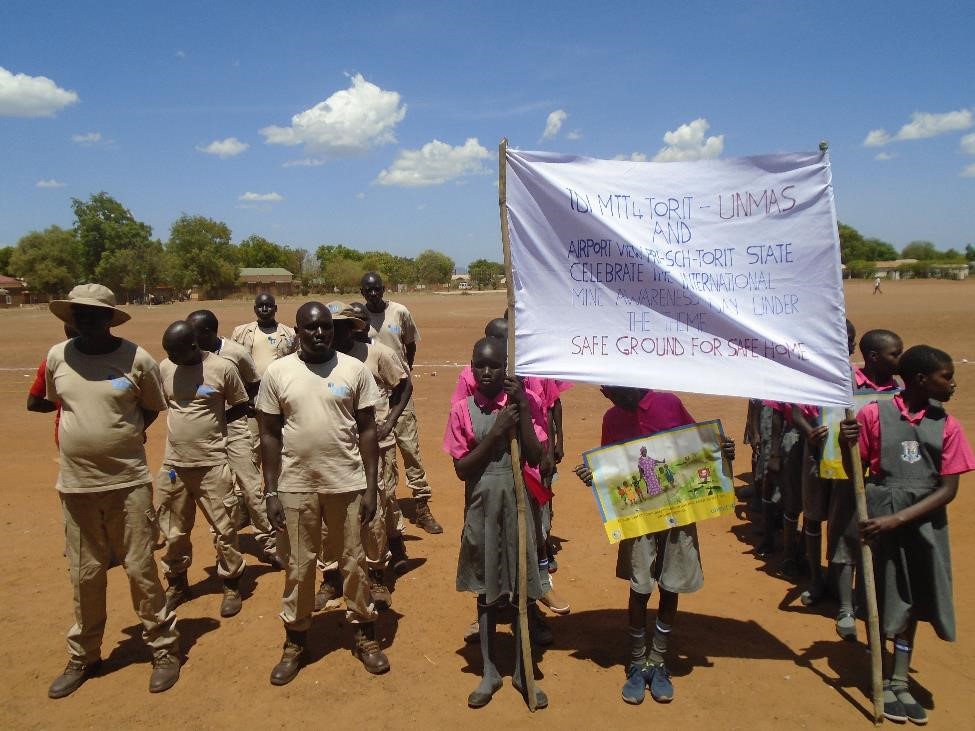 Each year on 4 April, the world celebrates the International Day of Mine Awareness and Mine Action. The theme for this year’s celebratory events was “Safe Ground – Safe Home,” a campaign promoting “the linkage between Mine Action, sport and the Sustainable Development Goals” (United Nations, 2019, International Mine Awareness Day 4 April 2019, 25th April 2019, <https://www.un.org/en/events/mineawarenessday/>). This idea of this theme is to demonstrate how replacing minefields with playing fields brings communities together, and consequently raises awareness about the victims and survivors of armed conflict.

Below are some highlights from the day’s events that took place in South Sudan to mark this occasion.

Two of the TDI Multi-Task Teams hosted an event at the football ground in Kapoeta, displaying posters and relaying Mine Risk Education (MRE) messages to those in attendance. Manual Mine Clearance drills were demonstrated, complemented by radio broadcasts and speeches delivered by government representatives.

A third TDI Multi-Task Team held celebratory events in Mabior-Aguei Payam. Government Officials, religious leaders, two primary schools and surrounding community members all joined in the day’s events. Speeches were delivered, providing insight as to why Mine Awareness Day is celebrated each year. It was a busy day with demonstrations of equipment, the delivery of MRE messages, football games and a tug of war for the schoolchildren.

The fourth TDI Multi-Task Team commemorated Mine Awareness Day at Torit Freedom Square. The day opened with prayers and was attended by the Torit Mayor, community leaders, students of two primary schools and the wider community. Posters and banners were displayed around the square and leaflets were distributed to the audience. The highlight of the day was the animated plays and songs performed by the schoolchildren.

Celebrations in these two counties started with introductory speeches, delivered by their respective Honourable Commissioners. Government officials attended the celebrations along with primary school children and surrounding residents. Along with the speeches, landmines victims were provided with the opportunity to highlight the dangers of landmines, encouraging a global ban on these weapons. An array of TDI assets were displayed, accompanied by short dramas performed by the schoolchildren.

Mine Awareness events in Raja, held at Raja Stadium, and were attended by county representatives, community leaders, South Sudan People’s Defence Force (SSPDF) Commanders, residents and students from the surrounding schools. The schoolchildren marched and performed songs for the audience. The day also featured speeches, including those delivered by women representatives. These speeches were directed at the women and children who often tread in unknown areas to find food. TDI equipment was displayed while a demonstration by one the TDI Mine Detection Dogs was given. TDI actively takes part in the celebrations of Mine Awareness Day each year to help raise awareness of landmines and unexploded ordnance. Events marking this occasion help encourage those who live in at-risk areas to be mindful of the dangers associated with these silent but terrible weapons.

TDI actively takes part in the celebrations of Mine Awareness Day each year to help raise awareness of landmines and unexploded ordnance. Events marking this occasion help encourage those who live in at-risk areas to be mindful of the dangers associated with these silent but terrible weapons.