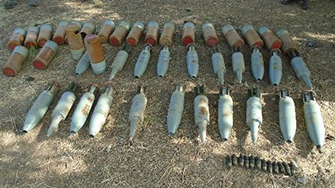 A Successful Season in South Sudan

In August 2020, TDI deployed Ammunition Technical Officers and two Ammunition Disposal Teams to enhance the safety of all Troop Contributing Contingent ammunition storage facilities in the country, with the aim to reduce the likelihood of unplanned explosions taking place.  At each designated location, inspections were completed prior to making recommendations to minimise the risk of explosions.

In support of this, the Ammunition Disposal Teams (ADTs) were able to plan, prepare for and conduct large scale disposal of ammunition and weapons.  These teams were also capable of identifying, preparing, licensing, and maintaining the demolition areas.  The teams were required to conduct additional cluster munition and battle area clearance (BAC) tasks when not disposing of unexploded ordnance.

The ADTs cleared over 181,000m2 of contaminated land littered with landmines and unexploded ordnance through battle area clearance.  The teams also cleared a contaminated football pitch which supported the United Nations campaign of ‘Safe Ground. Safe Home.’  The purpose of this campaign is to raise awareness of unexploded ordnance whilst turning minefields into safe playing fields for surrounding communities.

In March 2021, the teams cleared 11 abandoned Main Battle Tanks (MBTs), safely removing the munition stored in these tanks.  These Soviet era tanks were used during the country’s civil war in 2013 and when the civilian population returned to their homes, they built their houses around these tanks, oblivious to the hidden dangers inside.

The ATOs conducted 29 inspections, providing advice to the Troop Contributing Contingents for future safe storage methods.  Although the threat of stockpiled munitions remains high, a further 65,000 items of small arms ammunition was destroyed.

Despite the challenges of deploying the project during the COVID-19 pandemic, the teams were able to complete all the tasks required of them.  The teams helped reduce the explosive threat, supported the safe return of communities to their homes whilst providing opportunities for future sustainable development.