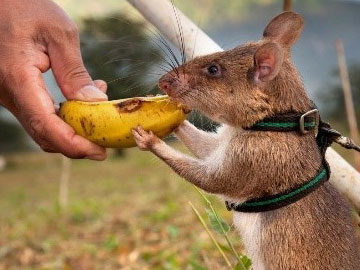 A Different Kind of Clearance

Nicknamed HeroRATS, African giant pouched rats are highly intelligent rodents with an acute sense of smell to sniff out the chemical compounds present in landmines and other explosive remnants of war. They have an average lifespan of seven to eight years and are critical in helping local communities return to their homes safely and quickly.

Since 2007, HeroRats have worked across the globe and are currently an integral part of mine action operations in three different countries. This includes Cambodia, which is the world’s second most heavily mined county.

Handled at four weeks old, it takes nine months to prepare a rat for accreditation and deployment to a minefield. Not so surprisingly, HeroRATS are too light to detonate any buried explosive devices. When the rats suspect a suspicious device, they scratch the ground alerting their handlers, as they were taught to do in training. When a HeroRAT indicates the presence of an explosive device, their handlers remove the rats and a Deminer arrives with a detector to carefully excavate the marked position to confirm the presence of a landmine for disposal. The rats are taught to ignore scrap metals, making them much faster to detect landmines than metal detectors.

In August 2019, TDI Operations Manager Roshan Christy adopted a six-year old HeroRAT named Magawa during his trip to Cambodia. Magawa is a highly trained mine detection rat and was born in Tanzania in 2013. He is currently deployed in South-East Cambodia. According to Roshan, Magawa is a determined worker and always friendly with his handlers. He can search approximately 200 square meters of minefield in twenty minutes. His favourite foods are bananas and peanuts.

To maintain a high level of accuracy in detection, it is important that Magawa continually utilise his olfactory senses. In September 2019, as the rainy season continued in Cambodia, Magawa was only able to work for a total of 438 minutes, clearing 2700 square meters of land. In that time, he detected two anti-personnel mines and two items of unexploded ordnance.

“There are a great variety of methods for detecting landmines that are available in the industry. Every asset has its pros and cons. When there is an option, selecting the right asset for the right task is key for effective operations. I am glad that my adopted HeroRAT is currently active on a mission to save human lives in Cambodia. This might be a small contribution, but it means a lot to me.” added Roshan, TDI Operations Manager in Abyei.