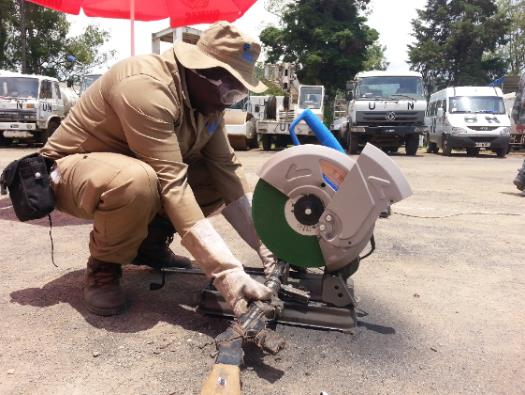 3 Years of Clearance in the DRC

In 2016, TDI were awarded a contract to provide survey and clearance services in the Democratic Republic of Congo (DRC). Initially, three Multi-Task Teams were deployed, however, a fourth team was added in 2018. The project was completed in mid-2019.

From logistics and shipping issues to inaccessible roads, challenges were faced whilst settling into the day-to-day running of the project. Despite this, our teams persevered to ensure that the client’s requirements were met.

Whilst the national staff recruited onto the project had prior experience, they completed a refresher-training programme, which focused on Surface and Sub-Surface Battle-Area Clearance (BAC), Manual Mine Clearance, Explosive Non-Technical Survey (NTS), weapon cutting, radio procedures and CASEVAC routines.

Due to the fluid security situation in the DRC, the TDI teams often operated in dangerous areas and required security escorts when travelling. There were frequent delays when travelling to locations due to damaged roads and bad weather. Demolitions were also often halted for fear of startling the surrounding communities.

Over the course of this three-year contract, TDI found and removed 76,400 pieces of unexploded ordnance, 1,200,000 pieces of small arms ammunition (SAA), conducted over 600 bulk demolitions and destroyed 1,700 weapons.

During the project, the teams conducted NTS, EOD, stockpile destructions, weapon cutting, SAA incinerations, BAC and Community Liaison sessions in their respective areas of operation. The teams performed well, demonstrating their knowledge and experience as well as dedication to their tasks whilst continuing to develop their skills.